Kimberly Bryant is an electrical engineer in biotechnology. Bryant is the founder of Black Girls Code, a course that teaches basic programming to black girls, who are underrepresented in technology careers. Bryant has been recognized by Business Insider as one of the 25 Most Influential African Americans in Technology”, and in 2013 she was named by the White House as a Champion of Change for Tech Inclusion. 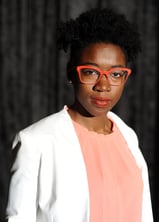 Joy Buolamwini is a Ghanaian-American computer scientist and digital activist who works at the MIT Media Lab. Buolamwini is the founder of the Algorithmic Justice League, which works to challenge bias in decision-making software. She is highly educated, with degrees from MIT and Oxford University. She is a Rhodes Scholar and a Fulbright Fellow.

Rediet Abebe is an Ethiopian computer scientist who works on algorithms and artificial intelligence. She is the first Black woman to be appointed a professor of computer science at the University of California Berkeley, and the first female computer scientist to be inducted into the Harvard Society of Fellows. Abebe works on research that develops computational frameworks for examining the questions of discrimination, poverty, and inequality. She is the co-founder of Mechanism Design for Social Good (MD4SG), which works to improve access to opportunity for historically disadvantaged communities. Abebe holds degrees from Harvard University, the University of Cambridge, and Cornell University.

Tawanna Dillahunt is a computer and information scientist based at the University of Michigan’s School of Information. There, she runs the Social Innovations Group, designing, building, and enhancing technologies to solve real-world problems. With degrees from North Carolina State University, the Oregon Graduate Institute of Science and Technology, and Carnegie Mellon University, Dillahunt’s work is cited over 2,000 times on Google Scholar.

Gebru is a computer scientist working in algorithmic bias and data mining, and is the co-founder of Black in AI. Until December 2020, Gebru was the technical co-lead of the Ethical Artificial Intelligence Team at Google. Google terminated Gebru’s employment after they demanded she remove Google employee’s names from a co-authored paper, and she refused.

Ayanna Howard is a roboticist and the Chair of the School of Interactive Computing at the Georgia Tech College of Computing. In March 2021, Howard will become the Dean of the College of Engineering at The Ohio State University, becoming the first woman to lead the College of Engineering.  In 2008, her SnoMo robots won international attention as they studied the impact of global warming on the Antarctic ice shelves. She founded Zyrobotics in 2013, which works to provide therapy and educational products for children with special needs.

Yeshimabeit Milner is an American technologist and activist, and is the executive director and co-founder of Data for Black Lives. Data for Black Lives is an organization that works to advance people of color in the computing and AI fields, with the goal of combating racial bias in technology. Milner has a degree from Brown University and was named to the Forbes 30 Under 30 in 2020.

Andrea Grimes Parker is a computer scientist and researcher known for her work at the intersection of human computer interaction and personal health informatics. Parker currently serves as both Associate Professor at the Georgia Institute of Technology and the Adjunct Associate Professor at Rollins School of Public Health at Emory University. She holds degrees from Northeastern University and Georgia Tech.

Latanya Sweeney is a computer scientist who is a Professor of the Practice of Government and Technology at Harvard University; the Director of the Data Privacy Lab in the Institute of Quantitative Social Science at Harvard University; and the Faculty Dean in the Currier House at Harvard. From January 2014-December 2014, she was the Chief Technologist of the Federal Trade Commission. She is credited with the concept of “k-anonymity”. Sweeney holds degrees from Harvard University and MIT.

Valerie Taylor is the Director of the Mathematics and Computer Science Division of the Argonne National Laboratory. She researches topics including performance analysis, power analysis, and resiliency. She has authored or co-authored over 100 papers in the field of high-performance computing, with a focus on performance analysis and modeling of parallel scientific applications. Taylor is also the CEO and President of the Center for Minorities and People with Disabilities in IT. She holds degrees from Purdue University and the University of California at Berkeley.