This article was originally published by SecurityInfoWatch.com.

In an age when such a wide range of publicly available data is just a keystroke away, it stands to reason that screening the backgrounds of individuals would be easier than it was the days before social media. However, that simply is not the reality for most organizations in the public and private sector today. Even though the scale of what we consider to be the “open” internet – those pages that can be found by search engines like Google and Bing – is vast, there is also another layer, known as the “deep web” that contains an even greater amount of data that is not indexed and could contain critical information about people trying to cross international borders and open bank accounts for nefarious purposes. 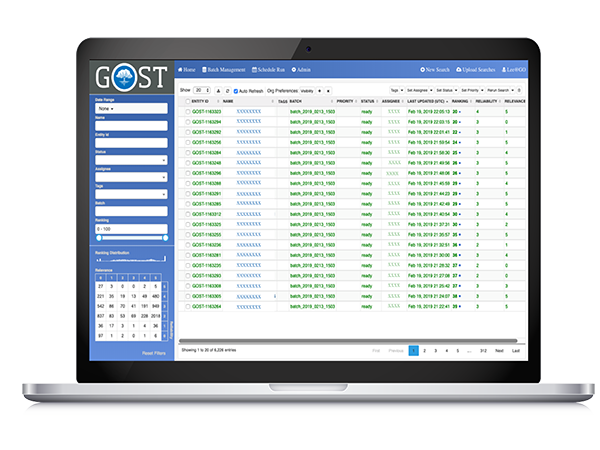 But just as every other industry is in the midst of digital transformation with the tools that are being brought to bear by artificial intelligence and machine learning technology, the same is also true of security screening with solutions like those from Giant Oak, whose hosted, software-as-as-service screening platform, dubbed “Giant Oak Search Technology” or GOST for short, was recently granted a patent for its domain-specific negative media search.

According to Giant Oak CEO Gary Shiffman, a Gulf War veteran who has served as a high-level executive at the Department of Homeland Security as well as a National Security Advisor in the U.S. Senate, the company’s technology was borne out of the need that arose for large-scale, high speed screening and vetting of persons during the early years of DHS following 9/11.  “If you think about the mission of the Department of Homeland Security, it is to make sure that terrorists and weapons don’t enter the United States and yet facilitate legitimate trade and travel,” he says.

Eventually, Shiffman says he began work on some initiatives funded by the Defense Advanced Research Projects Agency (DARPA) that would lead to the development of what would become Giant Oak. “Based on the work at DARPA and the application of machine learning, artificial intelligence and behavioral science, which is what my background is from in behavioral economics, bringing those to screening mission we invented GOST,” he adds.

Though the internet is a goldmine of information, Shiffman says the problem with it is that most of this data is unstructured, unorganized and is subject to change on an almost daily basis. And while most people use a tool like Google with its PageRank algorithm to make searching easier, the tech giant is still only able to index about 5% of what is actually available on the internet.

“If you’re shopping that’s a great tool, but if you are looking for terrorists, drug traffickers or human traffickers, it’s actually an inefficient tool,” he says.

Conversely, GOST indexes the internet not based on popularity for shopping applications but rather for security purposes using an algorithm based around concepts like money laundering, drug and human trafficking, terrorism, terrorism finance and the like. Searching both the open and deep web, the technology organizes search results based on these different behaviors and then provides the user with the results along with a ranking and reliability score. The ranking score indicates the probability that there is negative news relevant to a specific behavior associated with the person in question, while the reliability score measures the likelihood that the search results match that individual.

According to Shiffman, Giant Oak’s customers primarily include government agencies and financial institutions, both of which use GOST for the purpose of screening large populations to detect unknown threats. With regards to a government agency, for example, Shiffman says this screening would be done prior to conferring a benefit to an individual, such as allowing someone entry into the country or issuing a visa. In the case of financial institution, a bank may decide to run a search prior to processing a transaction or opening a new account.

“In both instances, they want to make sure they are not facilitating a benefit for a money launderer, human trafficker or other people engaged in illicit activities,” Shiffman explains.

Additionally, because they have built GOST to be a platform, Shiffman says that users can train algorithms to detect any use case provided that they have good training data and that it is a detectable pattern of behavior. So, rather than searching for data that may tie someone to a high-level terror or criminal organization, users can leverage GOST to search  a wide variety of activities and geographic locations pertaining to the subject in question.

Shiffman emphasized that they developed GOST with the goal of being an all-encompassing solution for the market.

“That’s really one of the main drivers for how we built GOST in that we don’t want to displace companies in the industry with a general-purpose tool with another general-purpose tool – we want to provide a tool that is customizable for any use case because if you’re a bank, government agency or department within a bank, your mission is different from every other department in the bank or your mission is different from every other agency in the government,” he says. “You shouldn’t have to rely on a general-purpose curated list – curated at great expense by one of these companies – you should be able to generate your own concepts of interest.”